Shopping Cart
Your Cart is Empty
Quantity:
Subtotal
Taxes
Shipping
Total
There was an error with PayPalClick here to try again

Thank you for your business!You should be receiving an order confirmation from Paypal shortly.Exit Shopping Cart

You Are Unique
4 comments

I request a prayer for my ongoing work to happen

I feeling so lost, so depressed and unhappy, I am tired of living sometimes. please help me, i am so tired no matter how hard I pray nothing seems to be working, please pray for...

"I have always been a believer in the special gift of mediums and have experienced readings in the past. Rev. Lynne came very highly recommended, and I was delighted by her energ..."

"Thank you very much Rev. Lynn for the guidance provided. I was impressed with the kindness and practical points she gave me. I will definitely recommend her to anyone who wants ..." 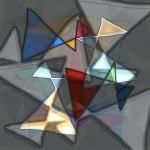 First,, there is great significance in an equilateral triangle. The three sides refer to the tri-natured aspect of God: God the creator, God the preserver and God the transformer. This tri-natured aspect of God, can also be seen in the analogy of a seeker's journey. There is the starting point, which represents his birth in the matter of creation, there is then the long journey of evolution and inner discovery; finally ending in the seeker's realisation of his true identity. At this point, the seeker loses his identity and re-submerges in his original divine consciousness. Thus there are 3 aspects to a seeker's journey. This tri-natured aspect is perfectly reflected in an equilateral triangle, which boasts a perfect symmetry. Within the 3 lines of the triangle, there is the area within. Thus we can say that the one is in the three and the three encompasses the one. This is the nature of God, 3 in 1 and 1 in 3. Thus it is said that God has four faces. Like points on the Compass; the four aspects of God, represent a different aspect of his nature.

The triangle must be constructed with its point upward and

end in a line fixing their limits. Taking the picture of these two diverging lines as a

whole, it shows the two universal powers, the Plus and the Minus, electricity and

magnetism, which are united by the line below. By this the manifested causal world is

symbolized, which, from the astrological point of view, is equivalent to Saturn, i. e. the

mystical number three. In the mental world it symbolizes will-power, intellect and

feeling; in the astral world it symbolizes power, legality und life; and in the physical

world it symbolizes, as already said above, the Plus and the Minus, and the Neutral. The

triangle with its conformity is thus reflected in everything and on every plane, for it is the

The mystical number three, i. e. the symbolism of the triangle, plays, as is well known, a

very important role in every religion. In the Christian religion, for example, there is the

Trinity: God the Father, God the Son and God the Holy Ghost; in Indian religion there is

Brahma, Vishnu and Shiva, i. e. the creator, the preserver and the destroyer, etc.